NEOC's events have changed to a Bring-Your-Own-Map format for
the immediate future. See details.

A good point about being meet director — most of the days in the woods are good weather, because you can choose what days to go out. Luckily, Monday, Nov. 25, was beautiful weather to be picking up controls.

Meet day on Sunday was my 2nd worst day orienteering, cold, raining, and windy. (Some may remember the worst day on October 18, 2009 in Wrentham, a bit colder, sleet, and even more wind.) This Sunday's weather provided an excuse for no-shows on the Traverse and
a low turnout on the recreational courses. There was only 1 runner on White, 3 on Brown, 4 on Green, and 21 total on Orange and Yellow.

It was a collection of hardy people showing up. Some of these hardy people even rode bicycles to the Blue Hills (photo below).

Thank you so much for the helpers getting the two meets through the weather tribulations. A special thank you to the people who helped for more than an hour.
Pia Kivisakk worked registration all day and picked up some Green controls.
Pelle Wåhlström: registration.
Jim Paschetto: computer set up, course vetting, setting out flags day before.
Janene Davis: runner entry into computer database.
Ian Finlayson: picked up Brown, helped with registration for hours.
Suzanne Robinson: setting out flags the day before.
Tanya Yatsunenko picked up White.

Other people stepped up to help in the many moments of weather stress. All the runners had a lot of patience with the chaos.
Does anyone have a video or pictures of the canopy tent blowing over the fence into the dumpster area, and the skillful retrieval during the high wind and rain?

Finally, Jeff employed a neat technique to hold the canopies in place using stone/tar weights tied to the frames, and Judy supplied some warm needed nourishment to workers and runners.

One of those days that are scary for meet directors.....hoping everyone finishes, or at least makes it out of the woods alive.

The day started as expected, cold and rainy. I was hoping maybe the forecasters were a bit off, but really hoped everyone was taking this seriously and wearing enough clothing. At the mass start I felt like "grandma" checking that everyone had hats and long sleeves. Well, most have more hair than I, so I guess that works for them. I handed out the maps quickly and got them off. Then checked in with Tony at the food station. So many thanks to him for doing this the last couple of years.....give the Shaklee products a try, they really are very well made and researched.

Finally Jonas arrived at about 2 hours, but with some bad news, control 15 was misplaced. How could I have done that? Thinking back though, I realized I had wanted to use the upper boulder, streamered it, but circled the lower one laying it out in Purple Pen. Compounded the error when hanging controls, after a brain fart putting the wrong SI boxes in the 16 to 18 loop, then went up to 15 without a map, and wandered around too low (duh!) before seeing my streamer. But without the map with me, it never struck me I was at the wrong boulder. Always take the final map with you when hanging the controls, and check it twice (along with the clue sheet and codes)!

Maria Bloom, persevered through the bad conditions to finish in first for the women, and took home a giant gingerbread cookie to speed her recovery.

As for the use of 1:15000 scale, it's the nature of the Traverse. Sprawled across 2 maps, it uses up every part of both maps, east to west, north to south, so there is very little way to cut off part of the maps. Ah, and the lack of north lines...with Jon C's help, we had created a LIDAR based background map for Blue Hills East. We removed the north lines so we could adjust it for the magnetic drift over the last 25 years. We didn't get them back on right away, and then I started trying to stretch and rotate the map to match the LIDAR map. Well, that turned out to be impossible (as Jon had predicted) so instead, in order to map the areas I wanted to use (the first 2 controls are in what was essentially unmapped terrain, mapped as dark green), I found a very small area where I could match up the hilltops and then fix the contours in that small area. Just before printing I realized the north lines were missing still, and I tried to restore them using the old map, but just couldn't get it to work,and time was running out (this was Saturday morning). I just didn't know where north was exactly anymore. I just realigned the text and figured it was close as before.

Anyway, thanks to everyone for being good sports about the screw-ups. 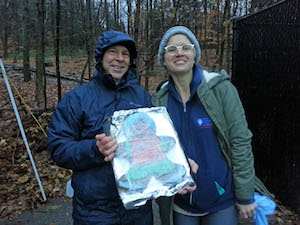 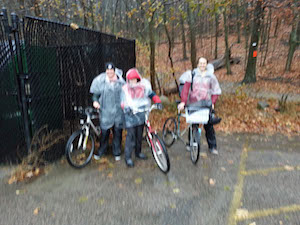 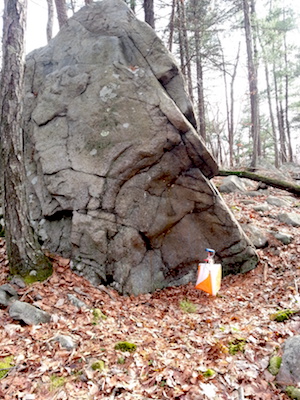 This event will be available in RouteGadget soon: Check back late Monday:

This event is available in RouteGadget (in the Results menu) — share your route, or just use the Splitsbrowser (click

in the Routegadget2 menubar).

Help out with e-punching, posting results, RouteGadget,...
No experience required! Contact the Webmaster.
NEOC is an all-volunteer organization.