WOC2012: More than just a week in Switzerland 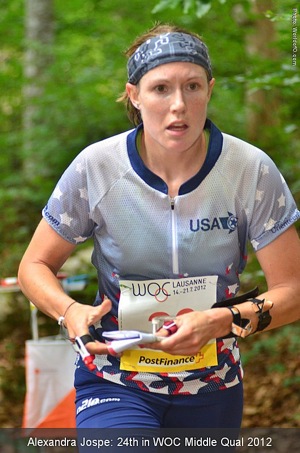 You know those days where it feels like your feet barely touch the ground as you run? Where the navigation comes so easily that every feature appears in front of you at exactly the right time? Those are good days. Unfortunately, it’s pretty rare that everything lines up exactly as it should, so those good days are few and far between. What can you do to affect when those days happen?

For me, the answer to reliable athletic performance lies in self-analysis and clear goals. I have always felt that having very specific, measurable, attainable goals is a key to success, and set both outcome and process goals to help get me there. Given the inevitable fluctuations in how fast a given finish place in a race ends up being, one of the more reliable measures of success is how far behind the winner’s time I end up being.

My goal for this year’s World Orienteering Championships (WOC) was to be less than 35% behind the winner’s time in the long distance qualification race. On a typical year, this would put me right on the bubble for qualifying for the final race, and based on last year’s results, this seemed feasible. To get there, I set a bunch of process goals, such as choosing solid attackpoints, and keeping laser-sharp focus the entire race.

I set these goals last August, after last year’s WOC. This meant that every single orienteering race or training that I did between August 2011 and July 2012 I had a chance to practice achieving my process goals. This also gave me time to physically prepare for Lausanne. After the 2011 WOC, I made a list of everything that I felt was a strength, and everything that I felt was a weakness in my orienteering. I set out to improve my weaknesses first, nabbing the low-hanging fruit. Approaching orienteering in this measured way helps me to prioritize my time in the forest. Like everyone else in the world, I never have enough time to do everything I want, and if every training session involves planning a course, printing out a map, driving to the forest, and tying my shoelaces in the most intricate knots known to man, well, that’s more involved than just hopping out the door and going for a run.

That said, I try to go into the forest as much as I can. Orienteering takes more strength and agility than running on the road, and I think that is something you have to train. Before the 2012 WOC, I wanted to do ~520 hours of physical training (including all running, cycling, skiing, and orienteering), of which over 100 hours would be orienteering. Keeping a training log is an easy way to measure if I’ve been getting into the forest enough. All of these goals are specific, measurable, and attainable, and achieving these process goals brought me one step closer toward being able to achieve my outcome goal. For a lengthier discussion on goal setting, follow this link to something I posted on the Team USA blog.

There is no “typical” week of training for me, because if you do the same thing all the time, your athletic performance will plateau, and you stop getting faster. A series of high-volume weeks must be followed by a recovery week, in order to let my body absorb the training I’ve done. Below are two example weeks from this summer; one is a medium-volume week, and the other is a recovery week.

The goal for this week was to orienteer every day. I was based from home except on Tuesday and Wednesday, when I had to be in Amherst for work.

I also sometimes do training camps, where I put in a lot more volume and a lot more intensity in a week than I normally would at home. The following week’s training is an example from a training camp I did in June, based in Peekskill, NY. This location gave me access to great maps, some of which I had never been on before. As a grad student, I can work wherever I bring my computer, so at this camp I spent ~4hr working between the morning and afternoon trainings (and then another 2-3hr working in the evening… as I said, I’m a grad student!). This lengthy lunch also gave my body ample recovery time, so that the second training session of the day was as constructive as the first training.

Orienteering is powered by enthusiasm and hard work.

Thanks to everyone who has invested their time and effort in the club.
Contact a meet director or Board member if you're interested in helping out.
NEOC is an all-volunteer organization.